We flew from Melbourne, Australia to Aukland, New Zealand. Going to New Zealand was not originally on our itinerary, however, since we decided to leave Southeast Asia early we decided to give it a go. Since it was a last minute add, we really didn't know what to expect.

While we were on our road trip in Australia, we had met a really nice Kiwi that had told us about a hop- on hop-off bus tour company called Stray that came highly recommended. We figured we'd had enough driving, so a bus tour would be a hassle free way to get around and a way to meet other travelers.

We spent the first day wandering around Aukland and getting ready for the bus tour that would be taking us all over the North island. We weren't super impressed with Aukland, but we did have really delicious burgers at a place called Velvet Burger.

The next morning we had to be up bright and early to catch our bus. When the bus pulled up, the driver stepped off to help us load our bags. He had a huge smile on his face, long dreadlocks, and no shoes. He introduced himself as “Splash.” From that point on we knew the tour would be awesome!

Our first stop was at this amazing hot water beach (Hahei). Everyone digs holes in the sand that fill up with really hot water. It was like having a natural hot tub with a killer view. After we left the beach we went for a hike down to Cathedral Cove. It was beautiful. That night we had a big barbecue at the hostel and got to know some of the other people from our bus. 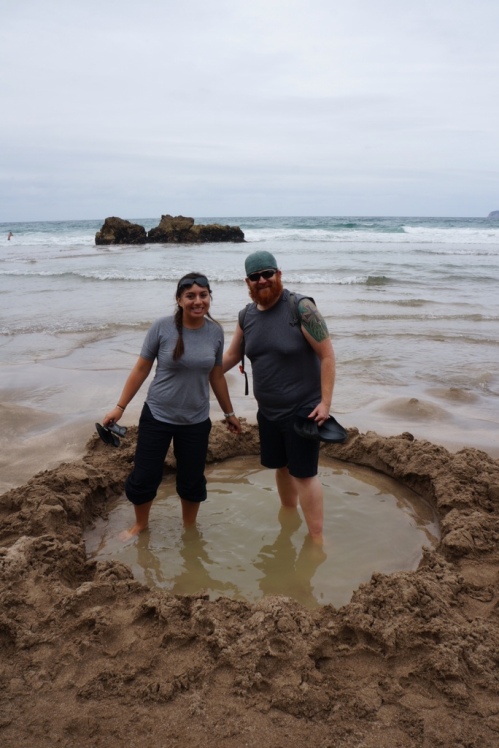 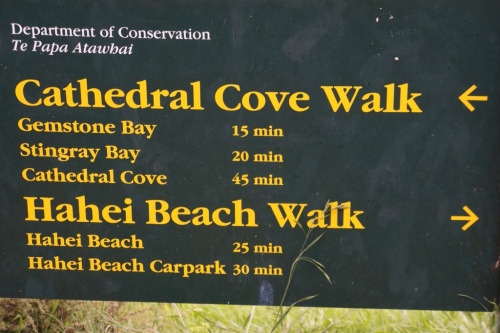 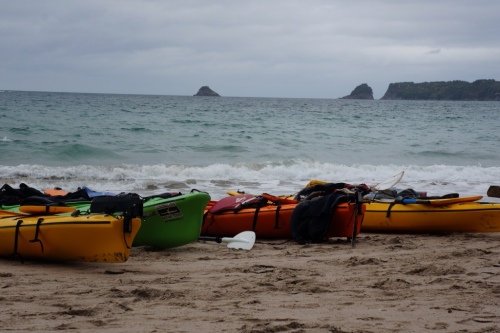 The next morning we were up bright and early headed for a little town called Raglan which is known for amazing surfing beaches. Unfortunately, when we arrived the surf was flat and it started to rain. So instead of paying to rent surf gear we decided to hike down to an awesome waterfall.

That night we stayed at a place called Solescape. It was up in a forest area with a funky vibe. The room we stayed in was an old train caboose car. However, the room didn't exactly keep the bugs out, so we had a couple visits from some critters throughout the night, but luckily escaped unharmed.

The next morning we were in for one of the best adventures we've had on our trip. Some friends of ours, Beth and Steve from back home, had told us that we absolutely had to go black water rafting. We had been looking forward to it since it was one of the options on our tour. The Waitomo caves in New Zealand have water that run through them and also have lots of glow worms that light up the insides of the caves like stars. So, we signed up for the rafting which basically consist of floating through the caves in the dark on some tubes and looking at glowworms. Well, it would be our luck that it rained the entire night before flooding out the cave used for tubing. However, the company offered us another option to do a repelling/caving/rock climbing adventure in another cave filled with waterfalls. We were a little nervous at first since neither one of us had ever done any of the previously mentioned activities, and they warned that it could involve crawling through some pretty small places (I would not recommend this activity to people afraid of heights or claustrophobia). It turned out to be a blast and we only had a couple minor hiccups with some small spaces. 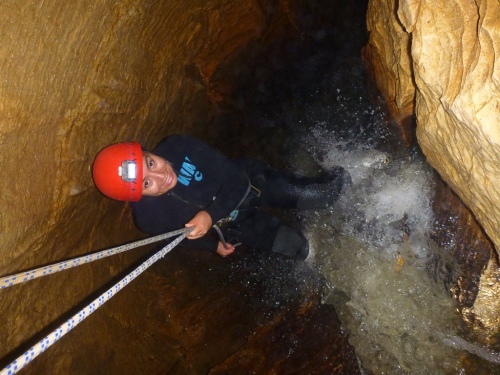 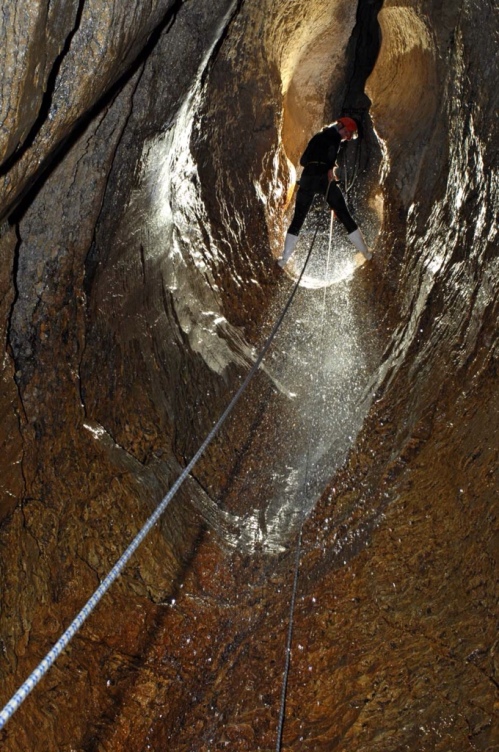 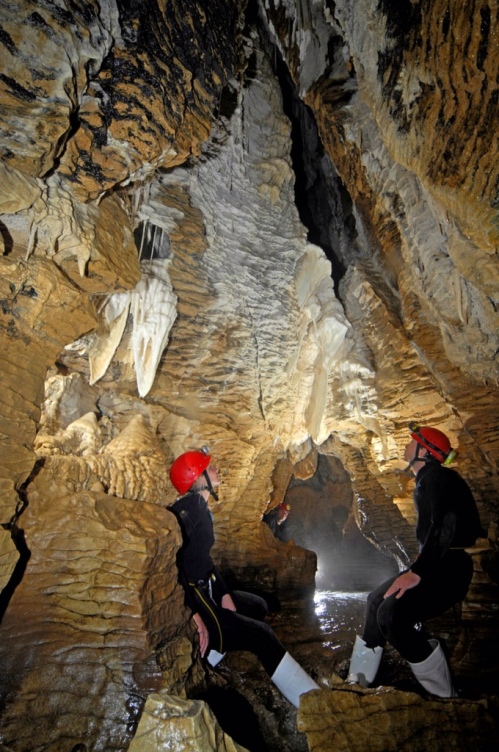 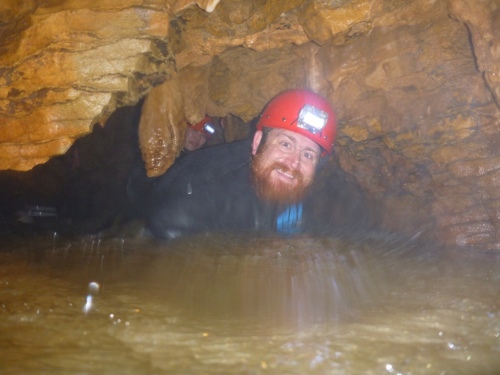 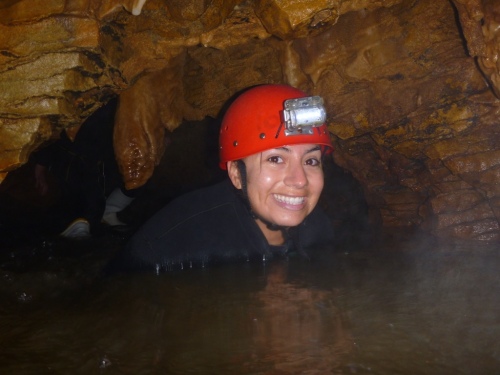 That evening we were in for a cultural experience. We got to visit a Maori family that hosts stray groups on their Madi(home). They performed some traditional songs and dances for us as we'll as taught all the men the Haka and the women a song and Dance. Dinner was followed by storytelling and a giant slumber party in their traditional meeting room. It was a fun time. They especially loved Scott and insisted on calling him “Alan” because they thought he looked like the guy from the Hangover. They also took about fifty pictures with him. 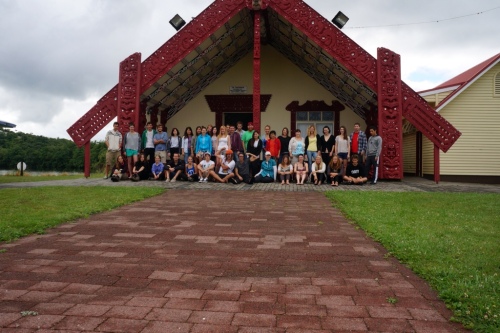 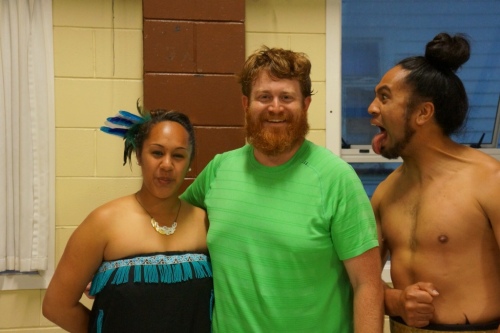 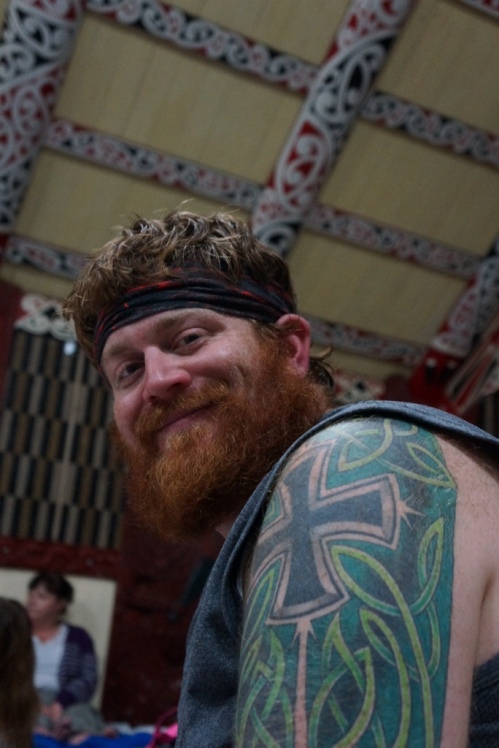 The next day we headed to a fun town Roturua, where we decided to hop off the bus and stay a couple days. This is where we said our goodbyes to our new buddy Splash. We thought it would also be goodbye to the friends we met on the bus, but it turns out we would end up meeting back up with everyone further on the tour.

Roturua was a lively town. We enjoyed going to a mud bath and sulphur spa. The only downside was smelling like sulphur for a couple days, but it felt great to relax in the tub. We also took a tour of Hobbiton, which is where The Lord of the Rings and The Hobbit were filmed. The hobbit hole doors were meticulously decorated and we got to have a beer in the pub after the tour. It was definitely worth going to for the scenery. 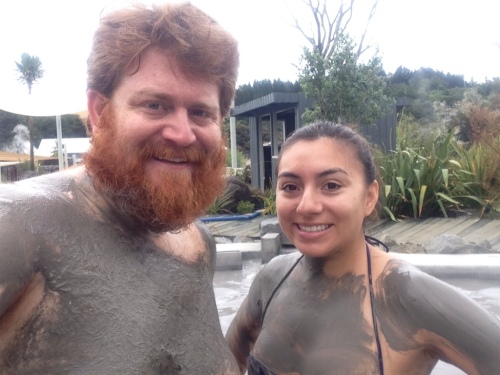 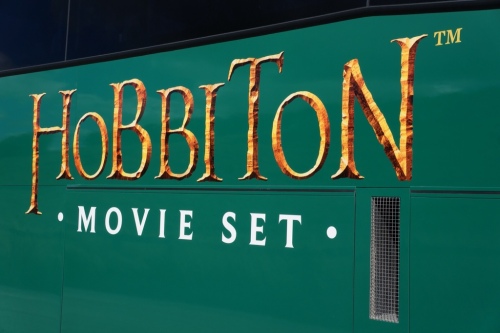 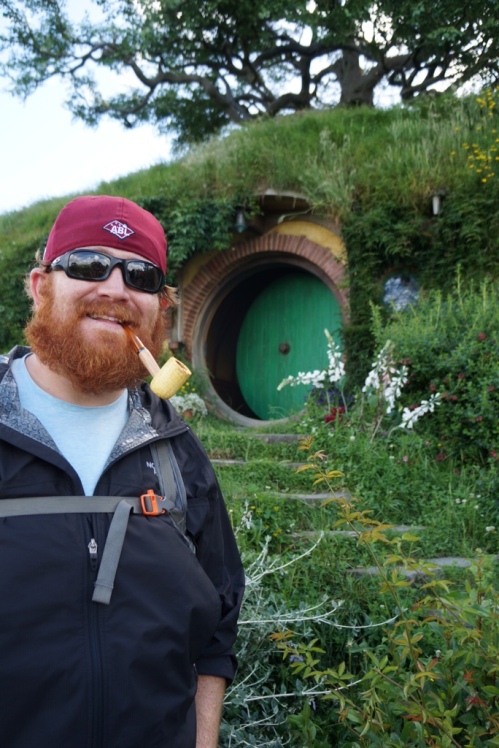 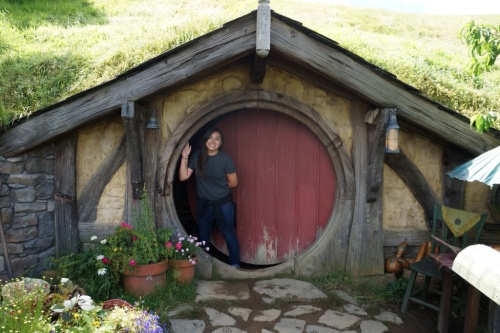 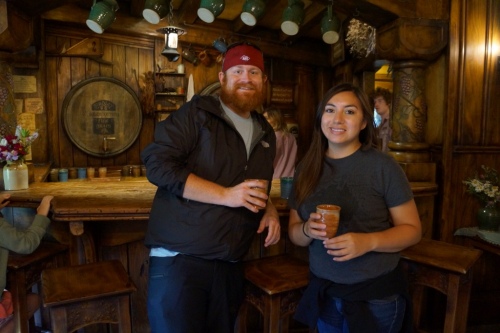 After a couple days in Roturua, we hopped on the next Stray bus that came through town. Our second Stray driver, Weeman, ended up being our best buddy by the end of our trip.

We headed to a lodge that sits on the edge of a beautiful lake, where we were hosted by another wonderful Maori family. It was a very peaceful place. I got to learn how to make Maori fry bread. We were served a huge Hangi feast that had been cooked in a fire pit. After dinner Scott went eel fishing. 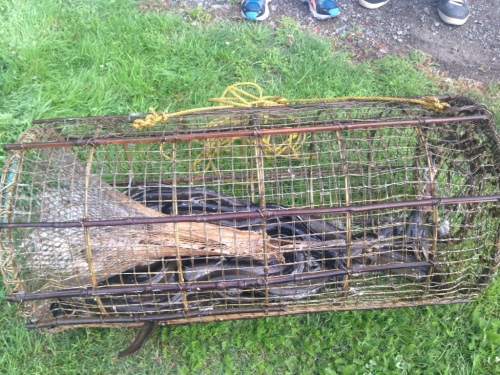 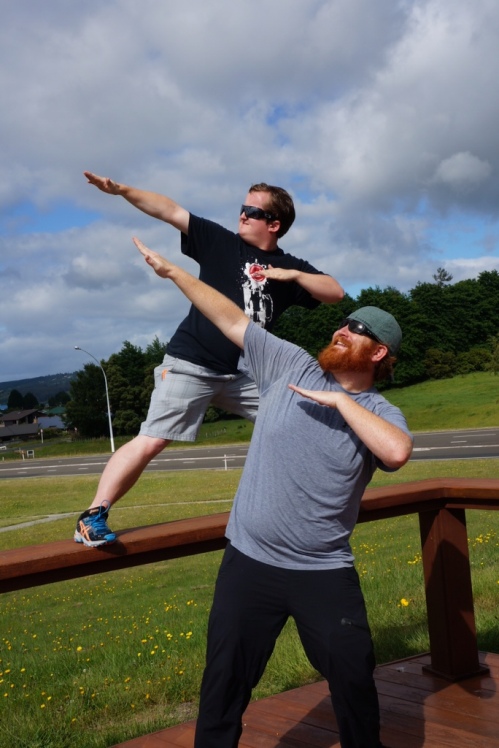 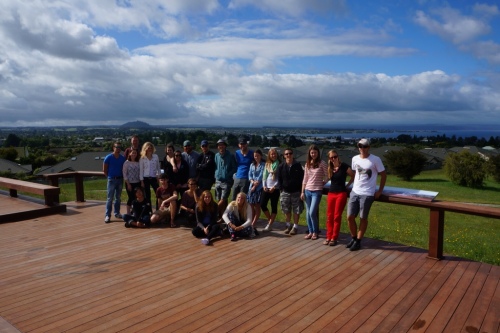 The next day we headed to a mountain lodge called Blue Duck Lodge (Whakahoro). I opted to do a three hour horse trek up a mountain, while Scott opted for skeet shooting and axe throwing. The scenery was amazing! 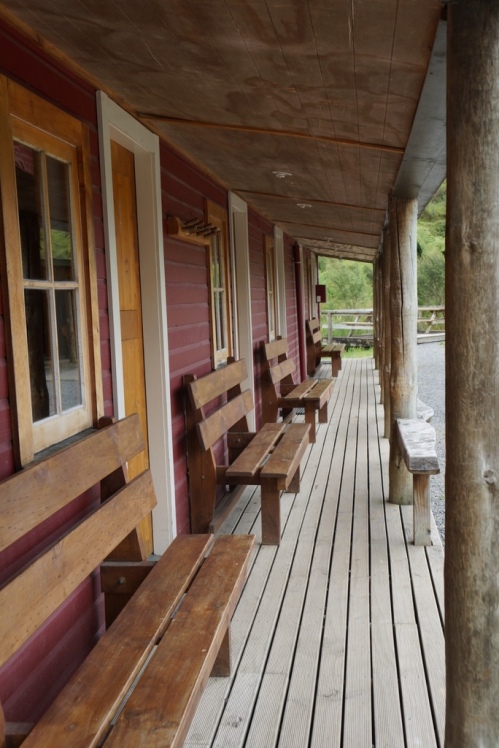 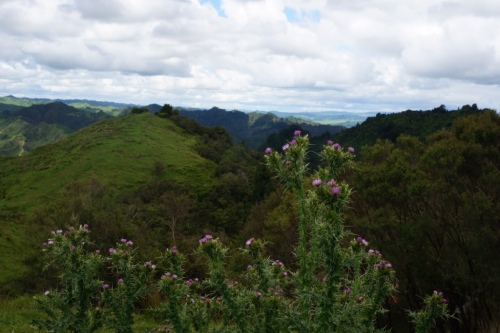 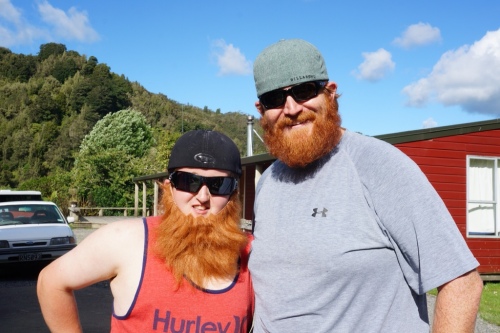 The next day we headed to a National Park, where we made a trek across the Tongariro Crossing. It was a 20k, 7 hour trek up a volcano and down the other side. We were sore, but felt accomplished when it was over. 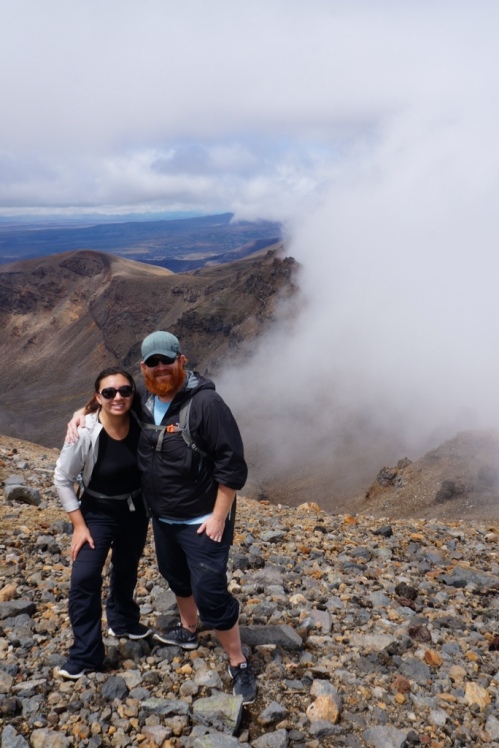 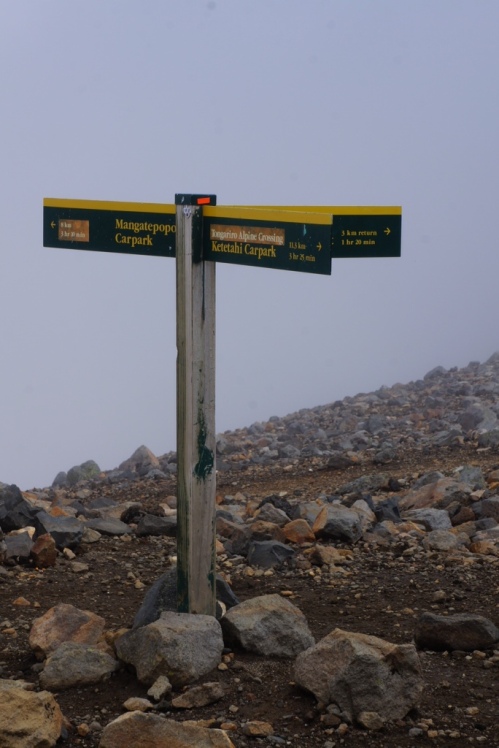 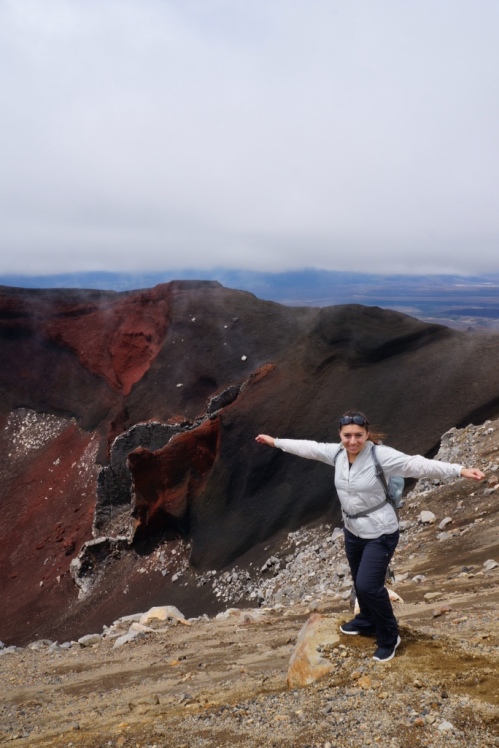 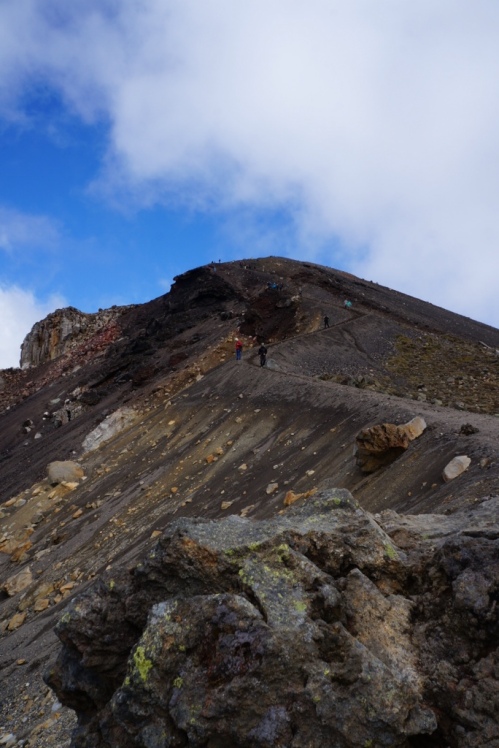 The next day we headed down to Wellington for a last night of fun with our friends from Stray.

The next day we flew down to Queenstown where spent the last few days in New Zealand. We stayed in a beautiful hotel right on the lake. We spent a lot of time unwinding, and also enjoying Fergburgers. Yum! 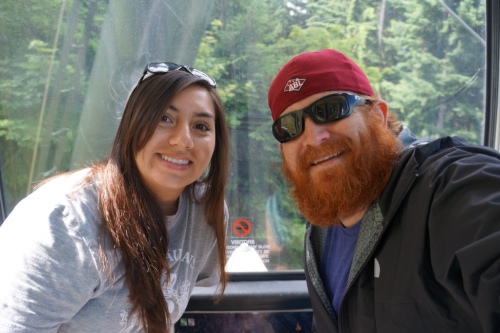 Our time in New Zealand was amazing, but not quite as amazing as the souvenir we brought home with us!

2014 will definitely be our next big adventure!

4 thoughts on “New Zealand, The Best Souvenir Ever, and Our Next Big Adventure!”