Our flight into Bangkok was entertaining, for a lack of better words. Scott had arranged for him to have an isle seat, and of course I would be stuck in a middle seat for the duration of the five hour flight. As we neared our seats, hoping nobody would be in the window seat, there was girl in the window seat wearing a long sleeve, ankle length dress that was covered in the brightest floral pattern known to man. As we got situated in our seats, the girl introduced herself and then proceeded to wipe down our entire row's armrests, tray tables, and window with disinfectant wipes. Then the dreaded “airplane talk” commenced. She started out by telling us all about her vacation plans, everything she ever read out of a Thailand guidebook, all about her Russian heritage, and an explanation of her flowery dress and all the others just like it that she had in different colors. When she had finally stopped talking long enough for us to escape by putting our headphones in, she taps me on the shoulder and proceeds by asking if I ever had thoughts of our plane crashing and burning. She even included the sound effects, “mmmnnnnn, swoosh, kaboom”. Then she said she got nervous on flights and maybe she should have taken some mushrooms to calm down. I leaned over and whispered to Scott that we might not want her standing in line next to us as we went through immigration when we landed in Thailand.

Glad to be off the airplane and in Bangkok!

After the plane landed we started gathering our backpacks to get off the plane, when the girl taps me on the shoulder again and asked if she could follow us to the immigration line because she was nervous and wasn't used to traveling abroad. We couldn't be rude and say no, so we said that was fine and got off the plane. We tried to walk fast enough to keep a little distance and made sure we went in a separate line and lost her at the baggage claim.

Having fun t the airport

We spent a few days in Bangkok before we flew up to Chang Mai. We stayed at the Hilton Millennium Hotel using some of the hotel points I had accumulated. The hotel was beautiful, and in a good location for activities on the Chao Praya river. 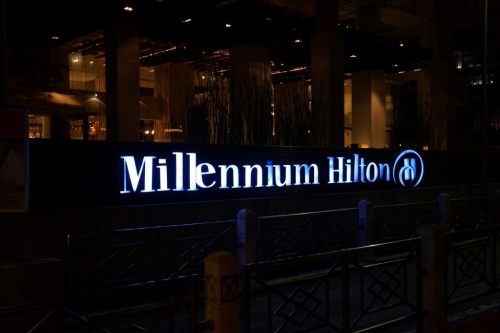 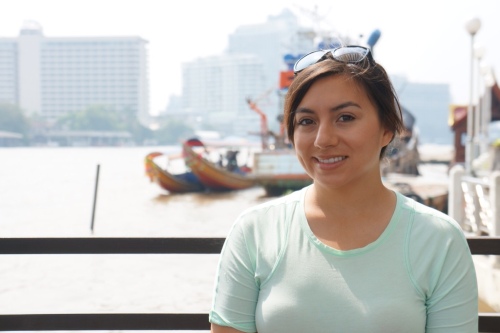 Waiting on the hotel dock to cross the river

Rooftop swimming pool at the Millennium

Getting in some pool time after battling the Bangkok heat! 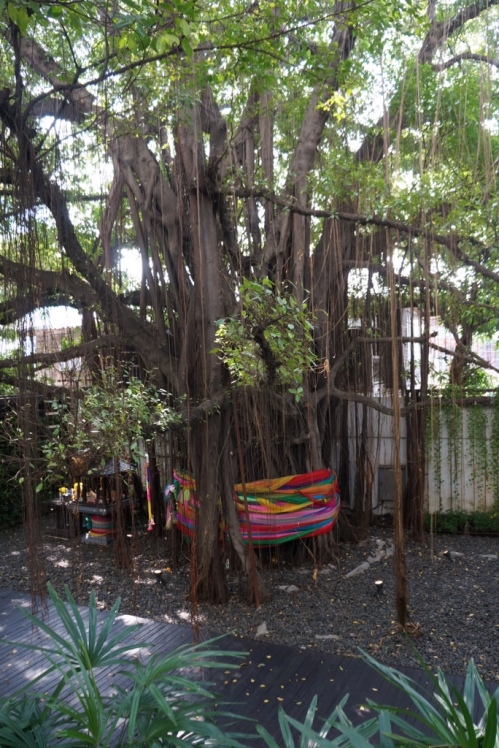 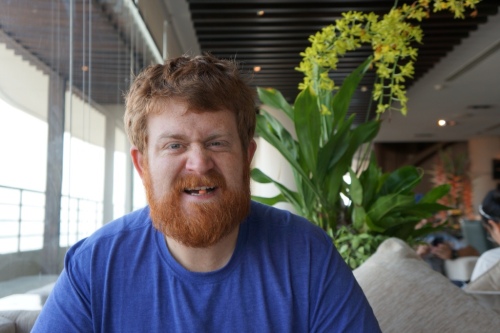 We took the orange line water taxi down the river and got off at the stop nearest to the Grand Palace and the Wat Pho that houses the Relaxing Buddah. We had to walk through a small outdoor food market to get to the street that was bustling with sidewalk peddlers and beeping tuk-tuks. It was alive and very colorful.

Scott on the water taxi

Boats on the Chao Phraya 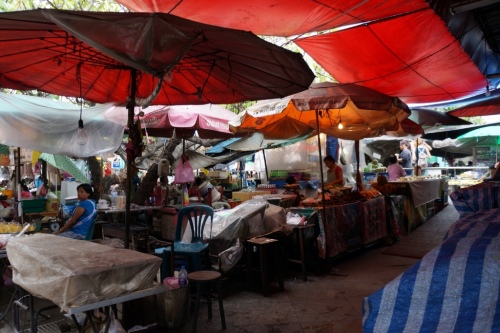 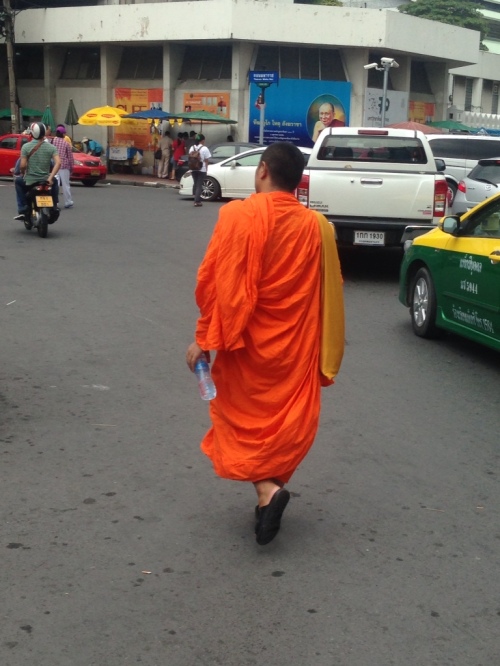 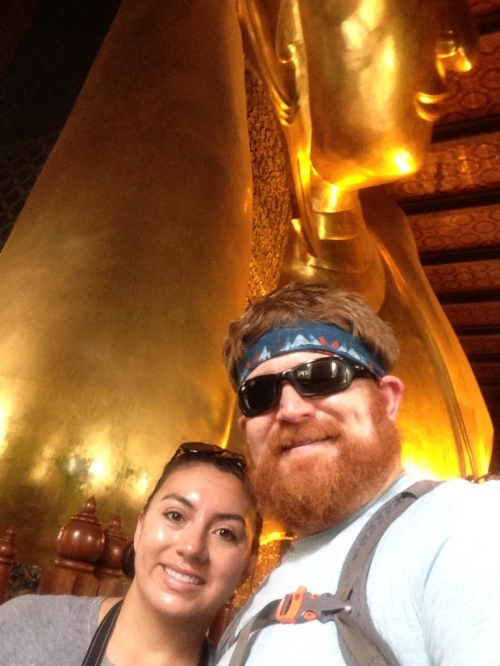 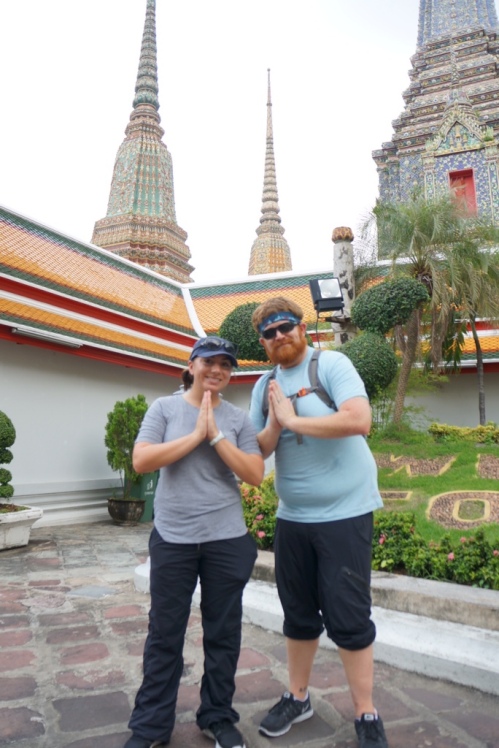 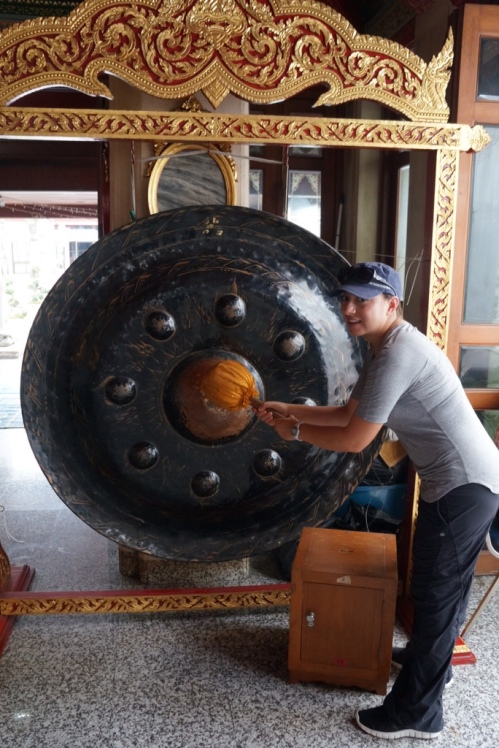 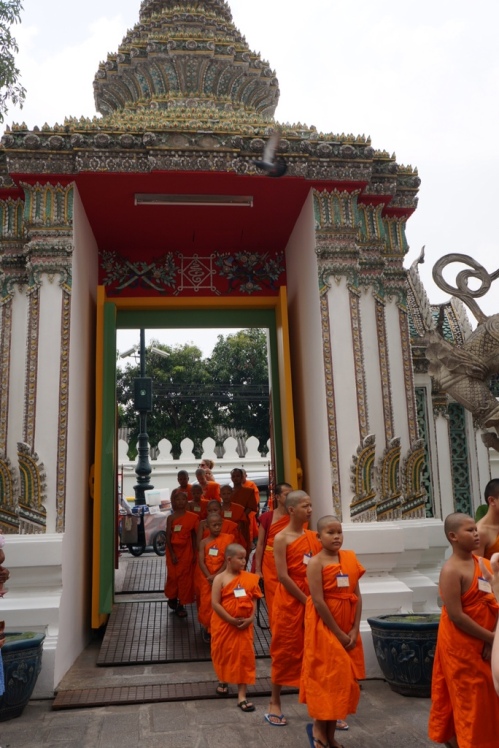 At the a grand Palace 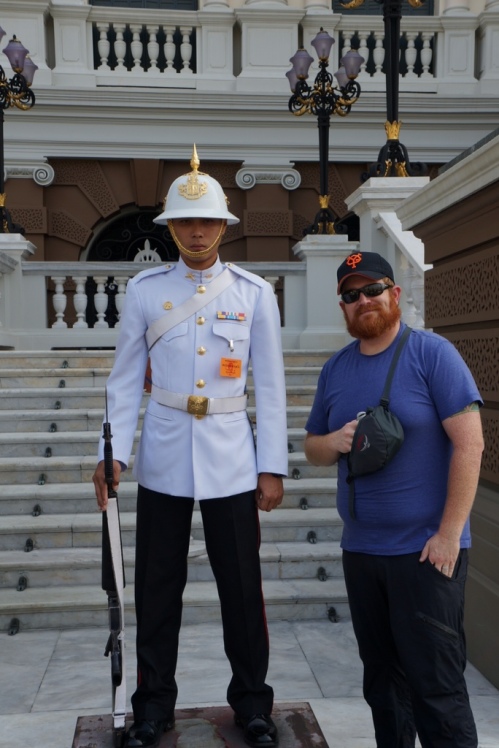 Scott with a palace guard.

We spent almost an entire day at the huge weekend market where we did some souvenir shopping. We took the sky train to the MBK shopping center and the high end Siam Paragon mall. We also took a stroll down Khao San Road and thanked God we were staying in a nice hotel instead of a hostel.

Walking to the market 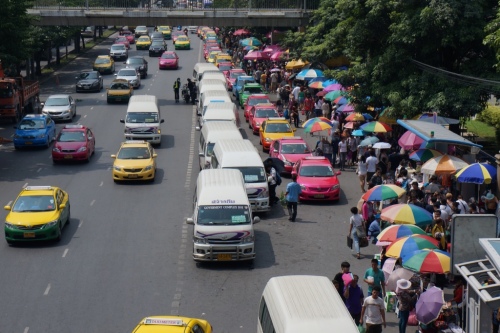 Walking to the weekend market

At the weekend market. 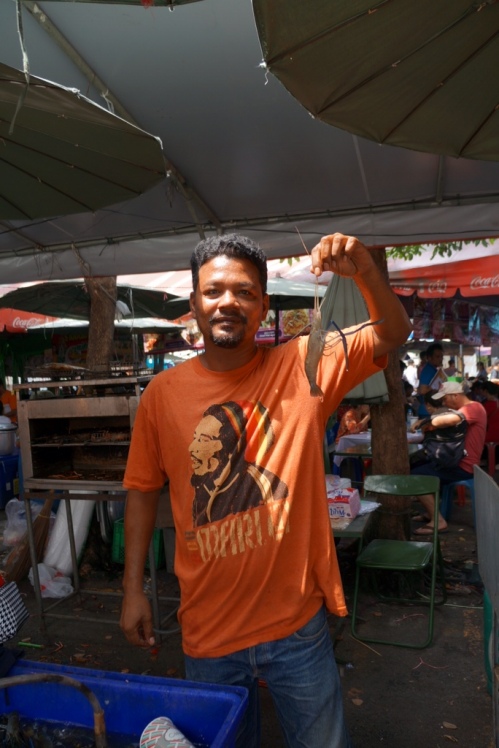 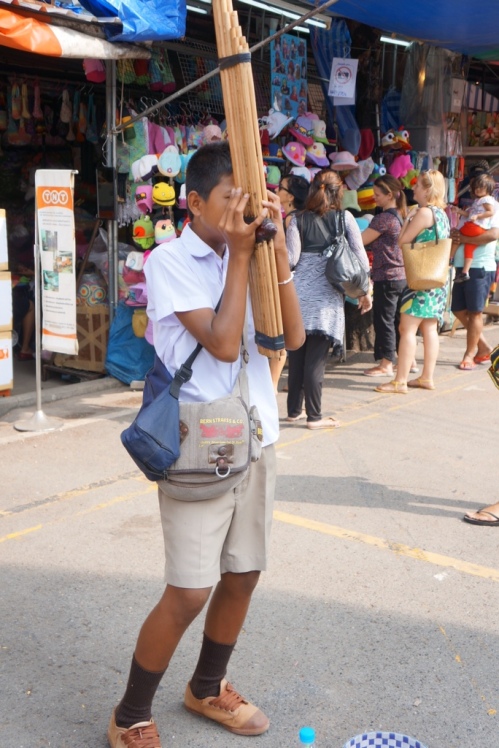 A boy busking at the market 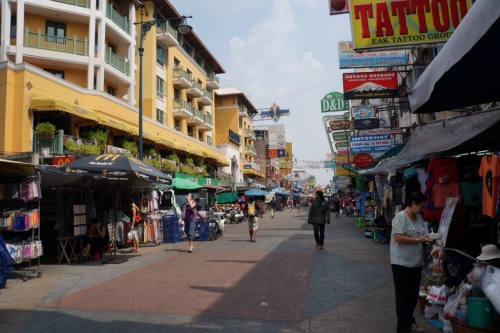 One night we walked Soi Cowboy, a street infamous for its nightlife containing bars, lady boys and old perverted men. It was a sight to see. We didn't stay too long, but it's one of those things that everyone who goes to Bangkok must see at least once. 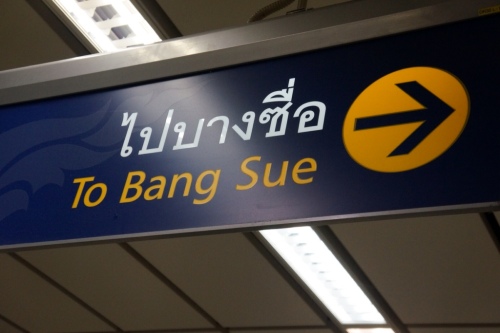 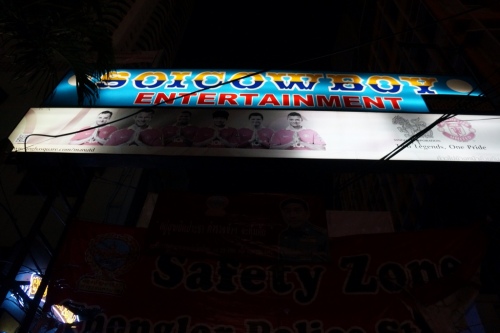 The Jim Thomson House was also a very cool thing to see. Although, the silk shop that it houses was very expensive.

After our trip to Chang Mai and the flight fiasco in Vietnam and Laos, we decided to return to Bangkok until we could come up with a new plan. This time we opted to stay in a different area of Bangkok to be able to explore more of the city. We checked in to the Hilton Double Tree Suhkumvit. It was actually a fairly new, really nice hotel that had an awesome rooftop pool and gym. The free breakfast was delish, and the hotel was half the price of the Millennium. This would be our home for the next eight days. We were able to really take in the culture of the city, explore more of the markets, and we even got to watch a Muai Thai fight. 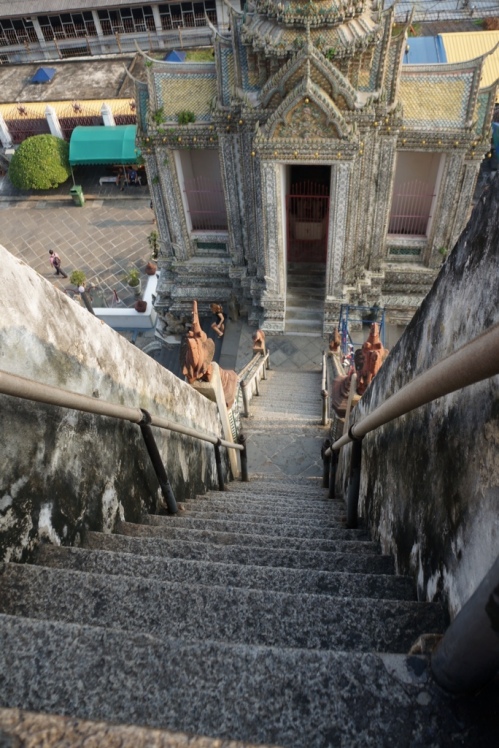 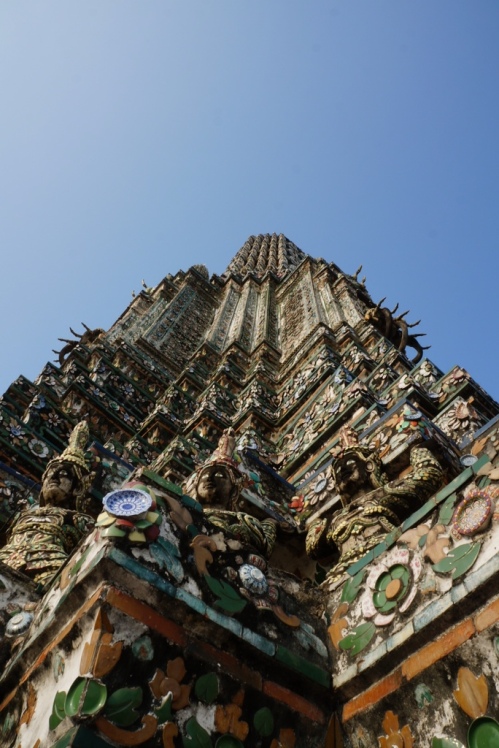 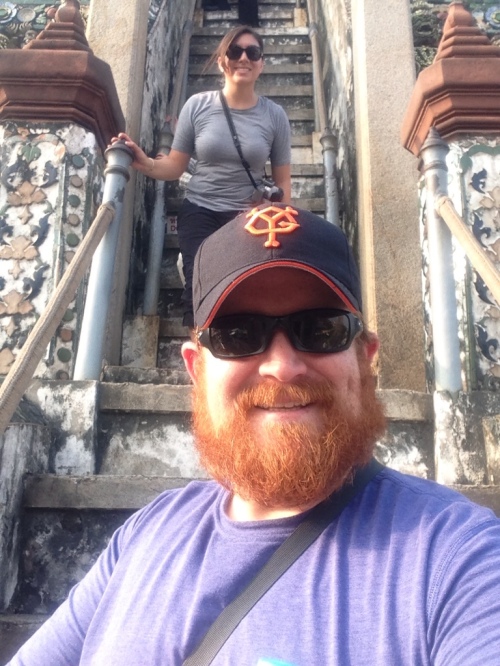 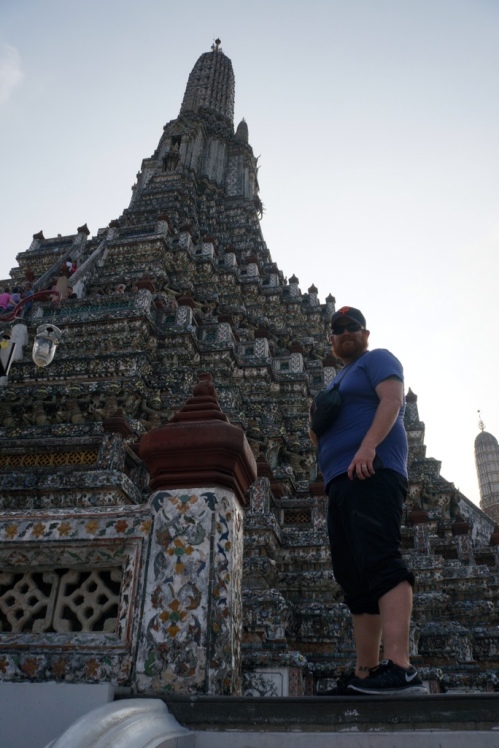 The flights to Cambodia were quadrupled in price, so we crossed out that idea and moved up our trip to India, allowing us to add more time in Australia and a couple weeks in New Zealand. We were bummed about missing out on Cambodia, but we know that we will definitely be back and we were super excited to be able to add New Zealand to our itinerary.

1 thought on “Two Weeks in Bangkok”